There's Nothing Common About Sense These Days 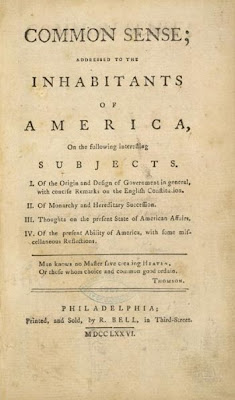 The once mighty pamphlet sure has tumbled a long way since the heady days of Thomas Paine or Martin Luther. What was once used to persuade the colonists to shake off the chains of Monarchy or dispute the Pope's right to sell indulgences is now nothing more than the off-line version of spam. Do you want to learn jujitsu or buy a used amp? Then turn to a posting wall where the 21st century pamphlet hangs. There you'll also find textbooks for sale, rooms for rent and the surprisingly un-coy "special message" adds. You may even find some kind of 9/11 conspiracy scrawl or a ultra-left/ultra-right manifesto (depending on where you are) but it's all just garbage. None of it rises to the level of Paine or Luther, but then again, not much does these days.

Take the pamphlet I came across today, for example. I walked into the bathroom at work and found the walls littered with 8.5X11 sheets of paper all warning of the dangers of swine flu. They laid out the correct way to wash your hands, and gave basic information about the symptoms of swine flu. Oddly enough, most of the symptoms of the piggie flue are the same as the regular flu, so these pamphlets are going to achieve on thing: the stoking of hypochondria.

But that's not my beef with these warnings that sprung up in my lav today. Neither is the fact that they says at the bottom: "for more information about hand washing, please call the Massachusetts Department of Public Health, division of Epidemiology and Immunization at 617.983.6800 or visit the MDPH website at www.mass.gov/handwashing" even though I was clearly in Pennsylvania. Is Massachusetts the only state that knows how to wash hands? Has Pennsylvania just given up hope on this front and deiced to focus on other projects, because I know it's not the roads. But I digress.

No. None of those points are what got my attention. Rather, it was the very fact that people still need to be told how germs work and that hand washing is good. It's 2009 people! We've got half the population who sterilize themselves into oblivion and, apparently, another portion who still don't know they should wash up with soap and hot water after they do a poop. Sweet break-dancing Christ!

Well I think if you don't know to wash your hands then you deserve to get swine flu, bird flu, hoof and mouth, mad cow, mad dog 20/20 or any other blight on society. I know that's a tough stand, but there it is. There are some out there that want you to believe that Mexico now poses the biggest pig-based threat to humans since the uprising at Manor Farm. And if this were true (which it isn't by the way) then shouldn't it be self-evident that you should be a bit more vigilant about germs?

I now have to add "lack of awareness" to my top 5 list of reasons we don't deserve to call ourselves evolved as a species. The new list now looks like this:

4. Proliferation of the use of the term "socialism" by people who not only don't really understand what it means, but who would be eminently better off it they were part of one.

3. The very existence of Paris Hilton, Caitlin Upton, Carrie Prejean and every one on "The Hills."

1. Racism, Sexism and the systematic castigation of anyone who is different.