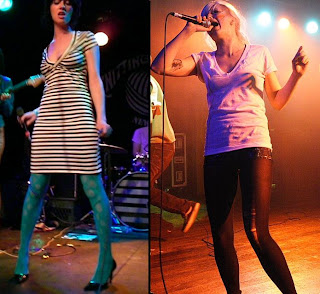 Really well done rock music doesn't just grow on trees, and it's so rare that musical acts come along that I really love. So it's all the more sad when two that I have only been able to enjoy for a short time are hanging up their instruments. Back in August the Nashville Teen Punk group Be Your Own Pet dissolved just four months after putting out their sophomore record, "Get Awkward". I had Get Awkward at #5 on my midway list of the best records of 2008, and It's only grown on me more in the past months. Their Self Titled debut record was far and away my favorite of 2006, and I still listen to to it all the time.

The other group that is calling it quits is the British group The Long Blondes. While BYOP hasn't really given much of a reason behind their breakup, the Sheffield based act were hit with a huge blow shortly after their second record hit stores this past spring. Their lead guitar player, and primary songwriter Dorian Cox had a stroke in June, from which he is working hard to recover. The band has said that they didn't want to continue on without him, and so they are scattering to separate projects. Lead singer Kate Jackson is already working on a solo record, in a move that I would have to think BYOP front woman Jemina Pearl will also try.

I took to the Long Blondes right away, at the end of '06. I heard them on internet radio, and I really loved their sound right away. Their first record, "Someone to Drive You Home" was as complete as a first record could be, and I placed it at #12 over all for 2006, despite the fact that it had just come out in November of that year. This year's "Couples" is a bit of a departure from their first, but was still very good, and I had it at #8 on the half year countdown.

Knowing that we will almost certainly hear from Kate Jackson and Jemina Pearl again makes me happy, but it's not quite the same in the end. Sting was great, but the Police were better. Eddie Vedder is a fine solo artist, but the real genius comes from Pearl Jam. I don't know how Kate will sound when she is singing songs she writes herself as opposed to ones Dorian wrote with the collaboration of the rest of the group. I'm also afraid that Jemina, being so young, may end up being another Avril if she falls into the wrong hands. But, I'm a worrier when it come to the art and artists I'm into, and I'm sure it will all be OK. I guess I just wish we had gotten a bit more from these groups before they disintegrated.

bad news about BYOP. But I'm sure Jemina will do something cool. meantime there's still Jamin's band JEFF The Brotherhood and Jonas has Turbofruits. Infinity Cat still has the original Damn Damn Leash CD, handmade by the band, on their website!