One Man's Trash is Goodwill's Treasure 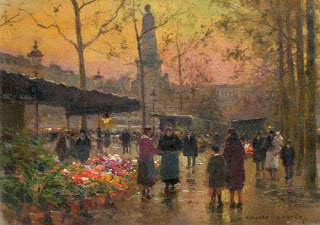 First things first: the only way I would ever be involved in a scenario like this, is if I was the one too stupid to know what I had on my hands. Someone in Easton MD dropped an Impressionist painting off at the local Goodwill store. The people at Goodwill were smart enough to do the research that the donor didn't and found that the painting, "Flower Market" by Edouard-Leon Cortes, was worth a lot more than the $100 they were going to sell if for. The manager of the shop took the impossibly involved step of putting the name that was on the painting into "the google machine" and found out that it was kind of a big deal. (Wow, double Will Ferrell reference!)

So they had it sent to Sotheby's where it was cleaned and prepared for auction with other Cortes works. It ended up fetching 40k, all of which will go to the good works done by Goodwill. I, for one, think that the store manager and employees should get a commission because if they hadn't been on the ball, that painting could very easily be on an Eastern Shore wall. I wouldn't go as far as the Baltimore Sun article did in saying that the wall in question would necessarily have been in a double wide, but that would just be so I don't offend XL, and my own Eastern Shore connections.

The Goodwill in question is just a few blocks from the apartment Inky and I lived in when we got married. My cousin also lives about a mile away from said second hand crap palace, and some of my other family members also called the area home for more than a decade. So, I'm not one to go painting with a broad brush when talking about the people of the area, something John Woestendiek at the Sun wasn't afraid to do apparently. His email address is john.woestendiek@baltsun.com by the way.

Now if you'll excuse me, I need to run to the York Goodwill to see what these dumb ass rednecks have given away without checking first. Shit, now I've done it too.

Rest assured that dumbass reporter will be getting an e-mail. No doubt someone made a mistake dropping it off but I get tired of these uppity Baltimorons still ragging on the land that time forgot!

My bet is that someone was cleaning out their mom and dad's house and took a bunch of junk over there and didn't look at it twice.