Who Has That Kind of Time? 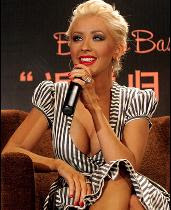 There have been a few reports that Christina Aguilera is thinking about making the jump to the silver screen. I say good for her, since I think she is a great singer, and has above average looks. That's about all you need to be in movies these days anyway, fame and hotness. And Christina has both... and you know it. Frankly, she could really clean up in the right kind of movie. Once she gets a tiny turn under her belt (oh wait, that's a skirt) she'll be ready for a bigger role. And once she's done a movie or two, she'll be able to cash in by nuding up, if the script calls for it of course. And do you know why she will be able to make dough by taking her clothes off in a movie? Because as much as people tried to make her out as the big slut, to Britney's good wholesome girl, she's kept herself covered in the three places that matter.
No splayed vag while getting out of a car. No nip-slip. Sure she's done plenty of shots of her in tiny panties with her nipples covered only by her hair or a well placed hand, but that's just been an appetizer. 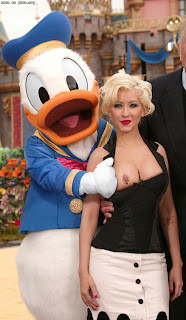 Someone once said that power it being able to control the release of information so it benefits you. Well in Hollywood power is making sure that if someone sees your nipples or cooter then you are paid well for it. People are so interested in seeing famous people in the buff that there are really talented computer geeks out there who spend time altering photos to make it look like that star that your love (or hate) got caught in a compromising situation. Take a look at the photo to the left of Donald Duck exposing Christina's right boob. It looks pretty real, doesn't it? (Click on the photo to get a larger image, perv!)
But once you see this photo (below) you realize that someone just took a lot of time to fool you. They even found a similarly sized tit that was pierced to boot! And people wonder why the 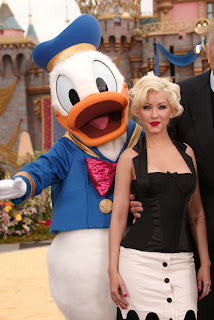 Japanese are passing us! They don't waist their time on this kind of shit. They just go to the break room, buy a coffee from one vending machine and a pair of soiled panties from the other and get back to work.
That's what we're missing in America! We need to be more up front about our perversions. Then maybe we'd be a little less obsessed. If people just started to demand that their significant other get them off, maybe they would stop turning to famous people to do it. If you want to spy on your wife while she's in the shower, so be it, then maybe you'd stop pouring over the web looking for photos of famous vag. And that would put our best and brightest back to work on real issues, rather than doctoring photos of famous people. Namely: falsifying a reason to invade Iran.
From the Laptop of Greazy Tony at 2:57 PM