Less Than Meets The Eye 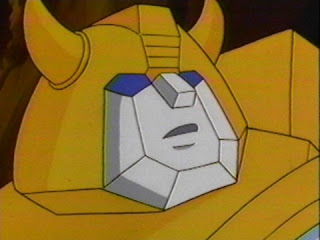 "Why does Michael Bay get to keep on making movies?" That is a line from the song The End of an Act which was featured in the movie Team America: World Police, and it's a great question. Other than 2005's The Island, which was saved by Ewan McGregor's acting and Scarlett Johansson's hotness, Bay really should stop fucking up otherwise fantastic movie ideas.

I played with Bumblebee, I knew Bumblebee, Bumblebee was a favorite toy of mine. 2009Camaro, You're no Bumblebee." For those of us who were around in the mid 80's and played with the Transformer toys and watched the show, the idea that Bumblebee is a kickass car like a Camaro is ridiculous. It's tantamount to getting Angelina Jolie to play Roseanne Conner in a screen version of the TV show Roseanne. 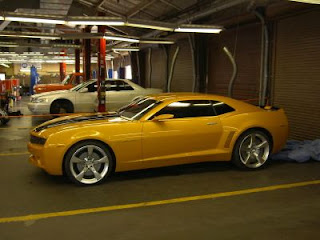 Don't get me wrong, I love Angelina, and I love the new Camaro. But, the new Camaro is far too cool, aggressive and big-boy to be Bumblebee. He was kind of a pussy in the old cartoon, and as little kids a lot of us could relate to him. He always had to prove himself to the other Autobots, kind of like a lot of us had to prove ourselves to our parents, teachers and older siblings. Bumblebee was one of my favorite Transformer toys. We had both the Yellow and very rare Red variations, the latter of which my brother found in China Town. As a family who owned a few VW's, we loved that Bumblebee was a Bug.

Apparently the story goes, that VW didn't want their products to be affiliated with the violence that is portrayed in the movie, and so they wouldn't let Bay use the VW Beetle to be Bumblebee. OK, sure, what ever. But what does Bay do? He substitutes the Beetle with a kickass car, probably because GM made him a great deal to use their cars as good guys. Not only did he pick a cool car for an

underdog character, but he picks the same car used by the leader of a cartoon contemporary of the Transformers. Matt Trakker drove a Camaro called Thunderhawk as the leader of M.A.S.K (Mobil Armored Strike Kommand) in his fight against V.E.N.O.M. (Vicious Evil Network Of Mayhem).

Wow, I never really realized how much of a rip off M.A.S.K was of both Transformers and G.I. Joe. Fighting cars, trucks and planes in a duel with a bad guy with a snake name: Cobra & VENOM. As kids we really fell for anything huh?

Well, it's not as if we're much different as adults are we? How many people in their late 20's and early to mid 30's are going to plunk down $10 to see this steaming pile? And for what? To recapture a piece of our past perhaps. That never works, especially when a douche bag like Michael Bay picks a Chevy Camaro to be the one Autobot who had a bit of an inferiority complex. Michael Bay blows!