If a douche bag falls in the forest… 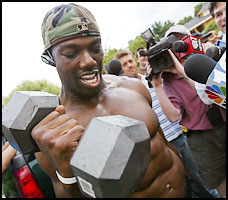 If whiney, overpaid asshole spits on another boastful shithead, but it’s not caught on camera, did it really ever happen?

After Terrell Owens spit in the face of DeAngelo Hall in a game between the Cowboys and Falcons on Saturday night, Owens was sure there was video of it. Why wouldn’t there be? In his mind the camera should be on him all the time. In fact it is my belief that if we all just stopped paying attention to him he would wither and die, and he knows it to be true. So when pressed about the loogie hocking, TO said he did it. In an interview with the NFL network he said: "I got frustrated and I apologize for that. It was a situation where he kept bugging me and getting in my face." And when he was chided for his lack of sportsmanship by Deion Sanders of all people he apologized again. Christ, when Neon Deion thinks you’ve crossed the line, you’ve really gone too far.

Sunday dawned and the whole world saw the clips of TO’s interview, but what they didn’t see was video footage of the spit. And trust me, there was some poor underpaid ESPN intern up all night on Saturday looking at every second of film from each camera to see if they could find the “money shot.” Seeing that there was no evidence TO and his team of “handlers” went to work concocting plausible deniability. The effort is being led, no doubt, by his publicist, who was there to call 911 when he took too many pills. And, also was there at the press conference afterwards to say there is no reason for him to try and off himself because “he has 25 million reasons to live” as if no rich person was ever so self involved that they tried to kill them self.

By Monday TO had come up with this beauty: “When it happened, we were jawing in each other's face, so it wasn't anything intentional," Owens said. "I didn't intentionally spit in his face. He's trying to make it seem like more than what it was by saying I hauled off and spit in his face. I feel like if I spit in his face ... somebody would've seen it.” Of course, because you are TO and that means that everyone must be watching you at all times, right? Folks do yourselves a favor and take a piece of advice from one of the great Simpsons Tree House of Horrors episodes: Just don’t look.