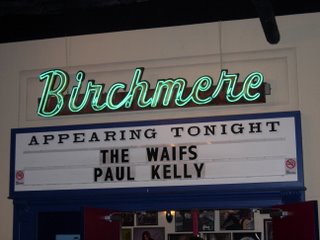 What would make three otherwise sane adults drive through the Baltimore Beltway, I-95, The Capitol Beltway, Downtown DC, and Downtown Alexandria, at rush hour no less. The answer of course is music. Inky has been going to shows at a break neck pace over the last year and a half, and I've been on board for most of them. This one, however, was all my doing. As I have delved more and more into the world of Australian music, I have found new bands to adore, and when I heard that two of those acts were going to be playing near our nations capitol, I jumped right on getting tickets.

I didn't do much research about the venue we were going to, The Birchmere, so it came as a surprise to all three of us as we walked into a big dinner theater type hall, that looked as if it was ready to host an Elks meeting. We found a table and ordered some dinner and awaited the venerable Mr. Paul Kelly.
When Kelly took the stage the first thing I thought was that he didn't look at all like a man of 51 years. He had a positively Michael Stipe look to him, with his short sleeve shirt and jaunty brimmed jazz man hat. He has a unique vocal style that I think has a twinge of Bob Dylan, but with a southern hemisphere bent. He stood at center (or centre as he's an Aussie) stage and played his guitar and harmonica and belted out nearly a dozen tunes including a few of my favorites. He played the hauntingly poignant "Everythings Turning to White" and ended with "How to Make Gravy" which he pointed out may be set at Christmas time, but the 100 degree weather in DC is reminiscent of Christmas down under. He was spot on with his performance, and I was sad to see his set end, even though I was dying to see the WAiFS hit the stage.

Donna, Josh and Vikki have not played together in an announced show in more than a year, as Vikki reminded us before they began playing. They get a pass, however, because the time off was due to their near concurrent pregnancies and deliveries. Donna told us that the boys, now 10 months, were back stage and that they were going to have a few more so they could franchise the band. There were no signs of rust from either Donna or Vikki and Josh was in top form, as he has had plenty of time to keep sharp during the WAiFS hiatus by playing with Missy Higgins. Vikki pointed out to the crowd that Donna didn't have her tambourine with her and that she was having a hard time figuring out what to do with her hands on songs where she doesn't play a guitar. She also let us know that in addition to his work with the wonderful Ms. Higgins, Josh has kept him self occupied by making the guitars he was using on stage.

The performance was fantastic, and not at all indicative of a group who hasn't toured together in more than a year. Sisters, Donna and Vikki have a wonderful silly banter with one another on stage that makes you feel like you're in their living room while they play a few tunes for you. All three of the main members of the group sing on various tracks and each and everyone of them sounded awesome. I was also happy to hear Donna ask Paul Kelly to come on stage to perform one of his best known tracks with them. He played banjo as Donna sang lead on "From Little Things, Big Things Grow" while Vikki sang harmony and Josh played his hand made electric axe. It was the highlight of the show for me, seeing these wonderful Australian musicians play a masterpiece of a song about a watershed moment in their nations history. I will remember this show for a very long time, and I would recommend a WAiFS or Paul Kelly show to any music lover.