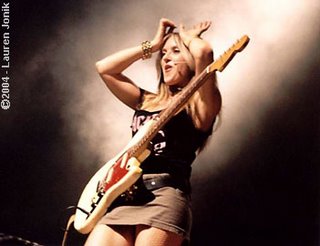 The more time I have spent talking to people about both, my list and Liz Phair over the last few months I realized I needed to combine the two. So, List meet Liz. I have this list of people I can step out on my wife for, if only for a night, and even thought I will never get the chance, I think it is a good indicator of what a person likes and is like. My wife's list is very telling about her, as is mine. 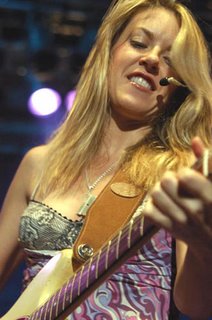 Why Liz hasn't been on the list is somewhat of a mystery to me. I have always loved her music, and I also think she is one of the sexiest sounding singers in the world. To top that all off, Liz is smoking hot, and has a sexual confidence that I find very alluring.

I also enjoy the fact that she was a kind of cult icon in the mid to late 90's and, unlike some of her other fans, I think she just keeps getting better even though she is coming up on the big 4 - 0 and has a child. The term MILF doesn't even come into play here, because Liz Phair is a fuckin' rock goddess, not just an ordinary mom. I know many people out there still don't know who Liz Phair is, and that is a shame. As I have said in previous posts about her she should be a lot more famous then she is. That said, she jumps to number 2 on my list with a powerful surge that knocks Nicole Kidman right off the list. It's been a while since Nicole has really caught my eye, and I think she was getting a lot of undue credit for being Australian, even though she as all but eliminated her accent. So the list now stands as such:

1) Sheryl Crow - she is getting a bit to skinny for my taste, but her hotness is undeniable

3) Christina Aguilera - With a new record coming out, she should be more visible again

5) Stacey Keibler - Just holding down this spot for a few more weeks till Angelina gets back.