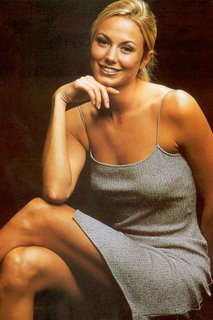 A few months ago I posted my list of women I am allowed to cheat on my wife with. The top 5 list is a version of the storyline from "Friends" where each of us are able to pick 5 famous people with whom we can have one night of sex without getting in trouble. It can't be that guy at work, or the girl next door, it must be someone with which we would have no real chance of meeting. As it turns out, I did have a very real chance of meeting the lady who I am appointing my #6, or first alternate: Stacy Keibler. Ms. Legs and I happened to work for the same company in the Baltimore area but I never bumped into her in the elevator. 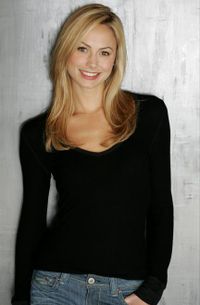 I feel the need to appoint an alternate for a few reasons. First and foremost being the disadvantage I am put at when a member of my list is unable to perform her appointed duties. A friend of mine recently asked me if I was into pregnant women, seeing as I have Angelina Jolie at #2. I am not one of those guys with some sick fetish about women in a family way, but it would be down right rude to drop her from the list all together because she is with soon-to-be hot child. So I racked my brain to come up with a solution, Enter Stacy (Quote Michael Scott: "That's what she said.")

I can't see placing her on the list full time at this point despite her quite obvious assets. She has really only been on my radar for a year or so. The reason is that I don't watch WCW where the Charm City girl was working before getting a higher profile, if not just as poorly judged shot on ABC's "Dancing With The Stars." The show put Stacy's legs on display to thousands of men and women who don't watch wrestling, but can get their minds around actors dancing to really bad versions of popular songs. I made the sacrifice to watch the show the first time around in order to see the hotness that is Kelly Monaco, but when Stacy showed up in the second season I was hooked. All that said, I don't want to bump Lauren, Christina or Nicole from the their spots for a newcomer and as I have said before I don't see anyone toppling Sheryl from #1 any time soon.

So for now, with Angelina awaiting the arrival of her bundle of joy I will have Stacy hold down a spot on the list. Who knows, if she is able to stay famous for a while, maybe pump out a movie or twelve she may crack the fulltime list one day. If she becomes a B-List name I wouldn't be able to consider her for the list because even a loser like me can get with a second string star, just look at scum Paris Hilton has mounted. I do see a change in the list coming up, however, because I have been spending a lot of time reflecting on the body of work of one of my favorite rockers and one of the woman on the list has kind of fallen of the face of the earth. We shall see.

Angry Inky said...
This comment has been removed by a blog administrator.
6:00 PM

Yup like two ships of the line in the age of sail... all guns primed and ready, "Fire" the broadsides! I am eating the Enteman's Cookies, don't forget the jelly!